NEW YORK WITH AN ACCENT 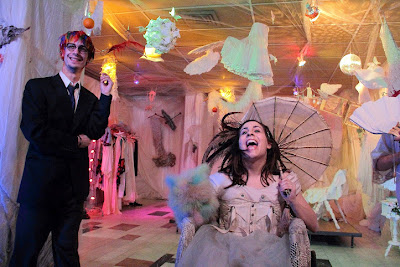 Come peek inside ICRNY's Window on Third Ave (at 38th Street) to see "4 Alice" written by Saviana Stanescu, designed by Daniela Codarcea Kamiliotis and directed by Ana Margineanu. FREE.
Every day thru May 29, 8 - 10 pm (new show every 20 minutes)

"The Window succeeds in its creative transformation of an otherwise nondescript building space that is normally used as a bookstore, a reception area or a meeting place.... The belief in the power of the story is what distinguishes The Window from other attention-getting simulacra in New York.” –
Randy Gener, theaterofOneWorld.org

Posted by Saviana at 1:36 PM No comments:

In this hyper-physical monodrama performed by Grant Neale, playwright Saviana Stanescu (on of NYTheatre.com 2010 People of the Year) has imagined three threshold moments in the life of the famed film director Roman Polanski. Under the direction of 3 time SoloNOVA director Tamilla Woodard, this fast moving tale of Desire, Escape and Punishment, mixes film and theatre as it delves into the brilliant mind of the controversial figure, sometimes victim sometimes villain. Performed in English, French and Polish, Polanski Polanski was commissioned and Developed by Nomad Theatrical Company.

“The writing is astonishing…a remarkable compelling performance by Grant Neale and fluid often surprising direction by Tamilla Woodard.” - Martin Denton, nytheatre.com
Posted by Saviana at 11:33 AM No comments: